For this Memorial Day, here’s a story of true bravery and heroism that needs to be told and remembered. 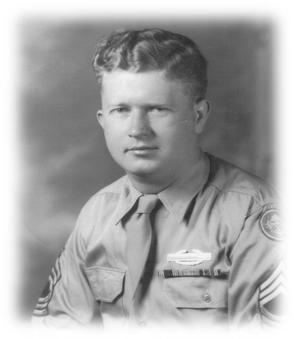 Edmonds was captured and sent to a German prisoner-of-war (POW) camp.   As the senior noncommissioned officer he was responsible for the camp’s 1,275 American POWs.

As Germany’s defeat was clearly approaching—Commandant Siegmann ordered Edmonds to tell only the Jewish-American soldiers to present themselves at the next morning’s assembly so they could be separated from the other prisoners.

Instead, Edmonds ordered all 1,275 POWs to assemble outside their barracks. The German commandant rushed up to Edmonds in a fury, placed his pistol against Edmonds’s head and demanded that he identify the Jewish soldiers under his command. Instead, Edmonds responded, “We are all Jews here,” and told the commandant that if he wanted to shoot the Jews, he would have to shoot all of the prisoners. He then warned the commandant that if he harmed any of Edmonds’ men, the commandant would be prosecuted for war crimes after the conflict ended—since the Geneva Conventions required prisoners to give only their name, rank, and serial number; religion was not required. The commandant backed down.

Edmonds’ actions are credited with saving up to 300 Jewish-American soldiers from possible death.

If you’d like the full story, please visit: https://en.wikipedia.org/wiki/Roddie_Edmonds or you can watch the video: https://player.vimeo.com/video/198357872